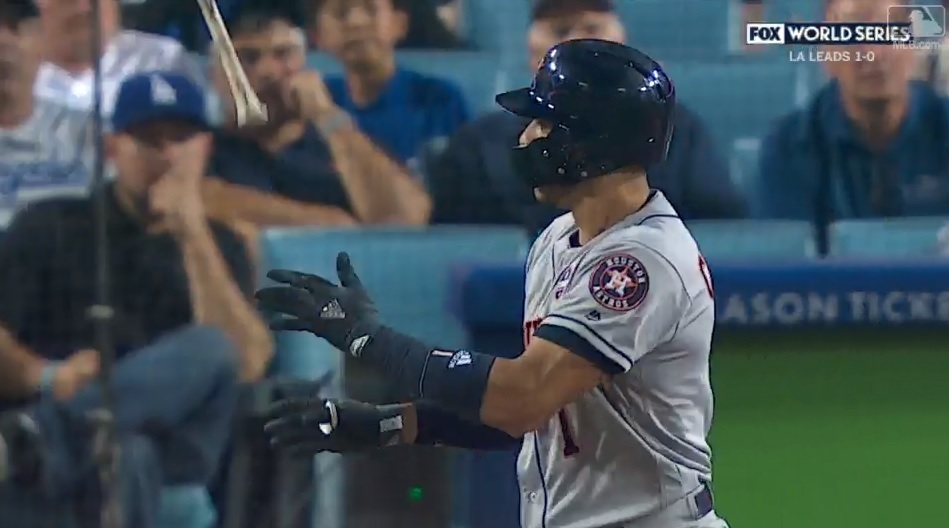 It wouldn’t be a World Series presented by Yasiel Puig without talk of bat flipping and impertinence in the face of Baseball Propriety. In Game 2, however, it was not Puig flinging his bat around—despite having hit a timely, monster home run—but Astros shortstop Carlos Correa, who’s not known for such things.

Given the chance, in fact, Puig offered an anti-flip, gently laying down his lumber after his almost-game-saving homer leading off the 10th.

No doubt jack and Puig goes stare down —> gently place bat on ground.

King of the trolls. pic.twitter.com/qO4qyBqTsT

It was almost certainly in reaction to Correia, who a half-inning earlier had given Houston a 5-3 lead after going back-to-back with Jose Altuve.

Puig has long since won the battle to bring this type of showboating into the mainstream. Where he truly shined yesterday was in his postgame comments about Correa’s display.

“I loved it,” Puig told reporters. “It was a little bit higher than the bat flips I normally do. He was happy, and that’s the way you should play in the World Series. Not everybody gets to play in a place like this.”

Puig has long asserted this let’s-play-joyously message when it comes to his own on-field drama. Being consistent in the position as regards the opposition earns him additional credibility.

“Like a friend of mine once said, I don’t know why my bats are so slippery,” Correa said after the game in an MLB.com report, jokingly about both his flip and Puig.

People who still begrudge these guys their moments are living in a bygone era. Time to get with the program.