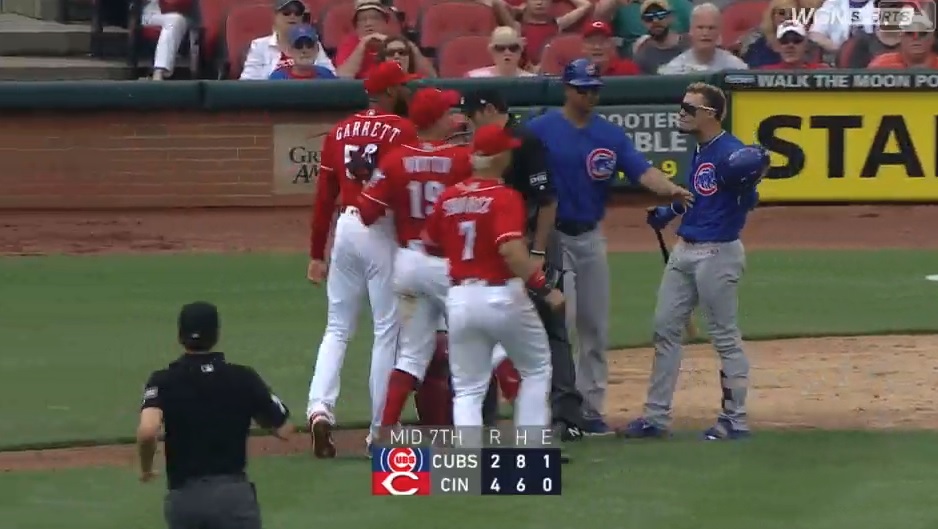 Turnabout is fair play. The shoe’s on the other foot. Something about geese and ganders. When a player like Javier Baez takes exception to an opponent’s display of emotion on the field, one can’t help but think about such phrases. Also, hypocrisy.

On Saturday, Reds reliever Amir Garrett whiffed Baez to close out the top of the seventh, and grew somewhat animated on his way down the hill, loosing what Cubs manager Joe Maddon later called “a Lion King’s type of roar.”

There is, of course, some history. On May 18, 2017—one day short of one year earlier—Baez touched Garrett for a grand slam at Wrigley Field, and did just a touch of home run pimping.

Who's gonna rock you when the sun won't let you sleep? pic.twitter.com/GHjElm3H8R

As is the way of big leaguers, Garrett has a long memory and an overt willingness to respond in kind. Baez didn’t appreciate it. Following his strikeout, he and the pitcher had words, and benches emptied. The surprising part about it is that Baez, the guy behind this:

… and oh hell yeah this:

… even took the time to consider his opponent’s reaction.

Baez (and some of his teammates) pointed out after the game that Cubs celebrations are strictly intramural, and not in any way directed at the opposition. So how about Garrett, a guy also known to occasionally show some emotion on the mound? Even if the pitcher’s Lion Kinging was directed at Baez (which it was probably was), there’s plenty of gray area when it comes to Baez’s own roaring. At some point, when a player is simply howling into the wind, it becomes difficult to draw too many distinctions.

Mostly, this seems like protracted frustration drawn quickly to the surface. At the time of the incident, Baez was 2-for-his-last-22, with nine strikeouts. The slugger has hit only .226 since April 26, watching his batting average fall from .310 to .265 in the process, with a meager .410 slugging percentage. He hasn’t drawn a walk since April 11. Suffice it to say that he’s in no mood for these types of shenanigans.

None of that, however, is particularly relevant. Javier Baez has rightly become a prominent face in the Let Ballplayers Celebrate movement, which is predicated on playing with emotion. Even if some of his points about Saturday’s game have merit, the overall optics of a guy like that calling out a response like Garrett’s doesn’t do much to further the cause.

Garrett himself said it perfectly after the game, in a Chicago Tribune report: “You dish it, you have to take it.”