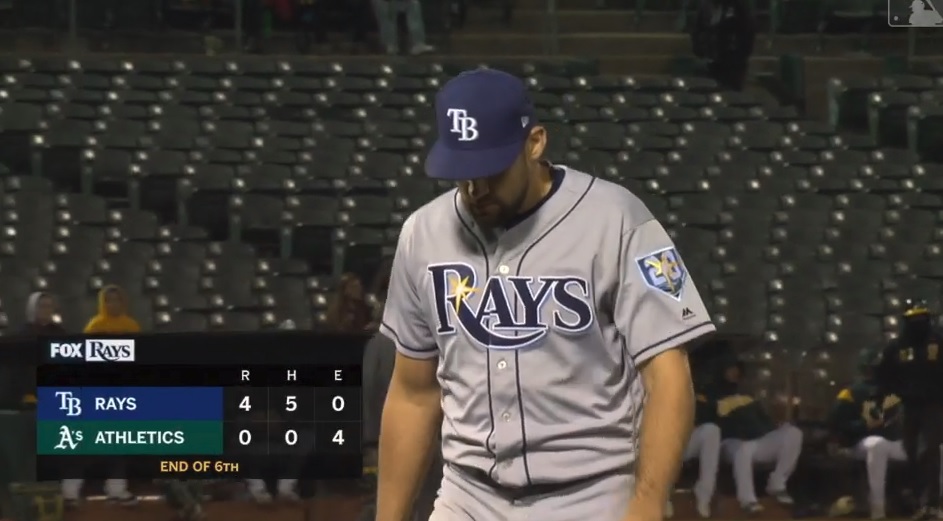 The first time I ever posted about a manager pulling a pitcher in the middle of a no-hitter, back in April 2010, a month after The Baseball Codes was released, it was a bit of a novelty.

It’s still kinda noteworthy when it happens though, and it happened again on Wednesday, when Tampa Bay’s Nathan Eovaldi tossed six hitless innings against the A’s before being pulled by manager Kevin Cash. (As it happens, his opponent, Sean Manaea, was pulled from his own no-hitter last season—the fifth “again” in the above link list.)

The right-hander had thrown only 70 pitches to that point, but was making his first start in nearly a year and a half, having only recently returned from his second Tommy John surgery. The last time the seven-year vet went seven innings was in August, 2016. The last time he went eight was the previous May. The last time he’d thrown a complete game was never. That Cash wanted to take no chances with the pitcher’s long-term health was entirely understandable, but didn’t do much to make the decision more palatable for Eovaldi.

“He just kind of stared at me,” Cash told the Tampa Bay Times, about the moment he informed Eovaldi that the pitcher wouldn’t be heading back out for the seventh.

Tampa Bay’s first reliever, Wilmer Font, gave up a hit to the second batter he faced, but the Rays held on to win, 6-0, while Eovaldi is on track to make his next start, healthy (one hopes) as ever.

In a semi-related item to the above story, the A’s did their part to throw a wrench into Eovaldi’s outing.

Hello @RaysBaseball are you aware that you are throwing no-hitter?

Because if not, you should be aware that you are throwing a no-hitter.