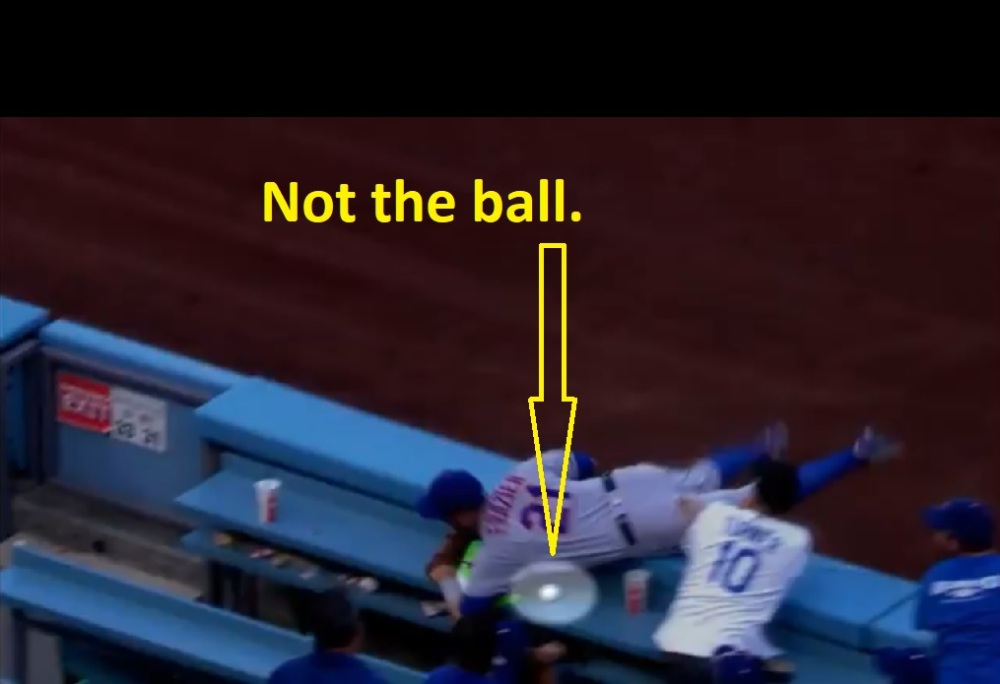 On Monday in Los Angeles, Mets third baseman Todd Frazier barreled into the stands along the third base line to make a spectacular catch of a foul ball. He returned to the field, held it aloft, absorbed the “out” call from umpire Mark Wegner, and tossed the ball into the stands.

It was, of course, a sham. Frazier muffed the catch as he hit the seats, out of view of both Wegner and the TV cameras, but had the wherewithal to grab another ball nearby, made of white rubber, which he subsequently displayed as proof of his catch. Upon returning it to the crowd, Frazier effectively erased all evidence of his malfeasance. Only through the crack reporting of SportsNet New York were we even able to discern that something untoward had taken place.

So: Was Frazier cheating? In baseball, where this kind of ploy has longstanding history, the answer is an unqualified no. George Bamberger summed it up neatly when he said, “A guy who cheats in a friendly game of cards is a cheater. A pro who throws a spitball to support his family is a competitor.”

There is plenty a competitor can do to fool an umpire. Outfielders hold aloft balls they know they’ve trapped. Batters who haven’t been hit by inside pitches jump back in feigned pain. Even Frazier’s tactic of switching baseballs isn’t original.

During the second inning of a spring training game in 1966, San Francisco’s Jim Ray Hart smashed a drive to the wall at Phoenix Municipal Stadium; in trying to chase it down, Cubs center fielder Byron Browne crashed into the wall. Despite the ball having bounced far away from the collapsed fielder, Browne somehow—without moving from his spot—picked it up and threw it to shortstop Don Kessinger, who relayed it to third base ahead of the hard-charging Hart. Umpire Mel Steiner called the runner out.

Players in the Giants dugout found the play to be curious. Willie Mays, paying close attention, quickly identified the problem. “He threw the wrong ball!” he yelled. “The wrong ball!”

In fact, Browne had gathered up a ball that had somehow gone uncollected from the outfield after batting practice, which happened to lie within arm’s reach of where he’d landed. Were it a regular-season game, perhaps he wouldn’t have attempted this. Were it a regular-season game, perhaps his teammates wouldn’t have tried quite so hard to cover it up. As it was, left fielder George Altman, while running over to check on Browne, pocketed the real ball.

At the behest of Giants manager Herman Franks, the umpires began a search of Cubs players. Behind his back, Altman passed the ball to second baseman Glenn Beckert, who in turn shoved it into the pocket of trainer Joe Proski.

When plate ump Stan Landes compared the grass-stained practice ball with which the putout was made with the spotless white one that was eventually confiscated from Proski, he sent Hart back to second with a ground-rule double.

“All I know is that I hit the fence and bounced away and there was a ball right there, so I threw it,” Browne said after the game in an AP report. Altman similarly admitted to his coverup with the real baseball, telling reporters that “I didn’t know what to do with it, so I put it in my pocket.”

As for the current imbroglio, Frazier admitted on Wednesday to his indiscretion, calling it “unbelievable.”

“I was flabbergasted that I even got away with it,” he told reporters. “It was one of those things where any third baseman—or any player—trying to win, if there’s a ball in front of you, you try to play it out. You do it as a little kid with your dad and mom, or your buddy down the street.”

Or in front of a stadium full of people and TV cameras. Either way, that’s baseball.

"It's Hollywood, sometimes you have to act out a little bit"@FlavaFraz21 breaks down how he tricked an umpire with a rubber ball, and how he thought about giving it to Jacob deGrom to pitch pic.twitter.com/CFokpzPZER