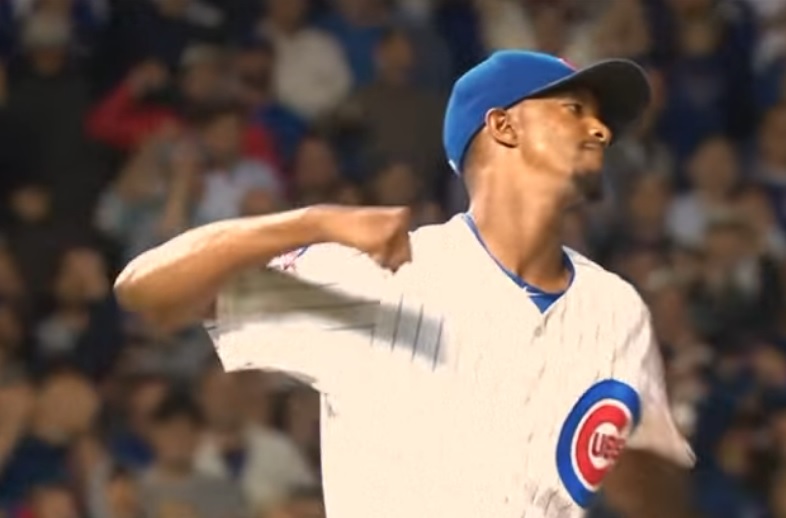 Maybe Carl Edwards Jr. needs more time to work into midseason form. He’s having an outstanding spring, posting a 1.93 ERA and striking out more than a batter per inning for the Cubs, but one part of his game shows clear signs of rust: After drilling Seattle’s Austin Nola on Tuesday, he came out afterward and admitted to reporters that he meant to do it.

“Yeah, I did. It’s just, honestly, it’s like the nature of the game, spring training or not. It’s just you get to a point where you’re kind of tired of the guys getting hit. I mean, those are our big guys. That’s 25-man roster. Those are guys that are going to help us win championships, help us win ballgames. And, you know, all due respect, but it’s the nature of the game. And it just gets to a point where you just get tired, you know? Yes, it was Willy and a couple innings before it was KB.”

The idea is that Edwards’ response will serve to curtail teams from taking similar liberties in the future with Chicago’s middle-of-the-order guys. It also suggests that a 40-man guy or non-roster invitee might not have received similar protection from the reliever.

Except that Seattle’s pitchers, Cresbitt and Mills, are both non-roster players, targeted for the minor leagues. The entire Mariners lineup, in fact, was Triple-A-level at best, considering that the big leaguers had already departed for Japan. Stepping in against wild youth during March games can be a crapshoot, and Edwards’ message pitch probably held little resonance for guys who weren’t trying to drill anyone in the first place.

At the very least, the right-hander let the rest of the Cubs roster know that he’s looking out for their best interests. Maybe—like Dock Ellis, who drilled three straight Reds players to open a game in 1974—he simply felt too much complacency on a team with playoff aspirations. Where he went wrong was talking about it. From The Baseball Codes:

When a pitcher confesses to hitting a batter intentionally, it’s an admission that, at best, strikes an odd note with the view­ing public. People inside baseball understand appropriate doses of retalia­tion, but the practice represents a level of brutality that simply doesn’t translate in most people’s lives.

This is the reason that such admissions leave the commissioner’s ofﬁce little choice but to levy punishment. It’s why Frank Robinson—one of the most thrown-at players of his generation and in possession of a deep understanding of baseball’s retaliatory code—was so heavy-handed when he served as Major League Baseball’s director of discipline, long after his playing career had ended. It’s why Jose Mesa was suspended for four games in response to hitting Omar Vizquel after saying he would do pre­cisely that, even though he wasn’t even thrown out of the game in which it happened. It’s why normally outspoken White Sox manager Ozzie Guillen responded with nothing more than a knowing smile when asked whether he’d ordered one of his pitchers to throw at his former outﬁelder Carlos Lee during a 2006 spring-training game. It’s why, after Dock Ellis famously and intentionally hit three batters in a row to open a game in 1974, Pirates catcher Manny Sanguillen proclaimed to the media that he had never seen anybody so wild, despite having been briefed by Ellis about his plan prior to the game. It’s why, when Mickey Lolich of the Tigers and Dave Boswell of the Twins exchanged beanballs in a 1969 con­test, each said afterward that his ball had “slipped.”

If the defendant confesses to a crime, the hanging judge has little choice but to act. Don’t be surprised when MLB hands down a suspension for Edwards in the coming days.