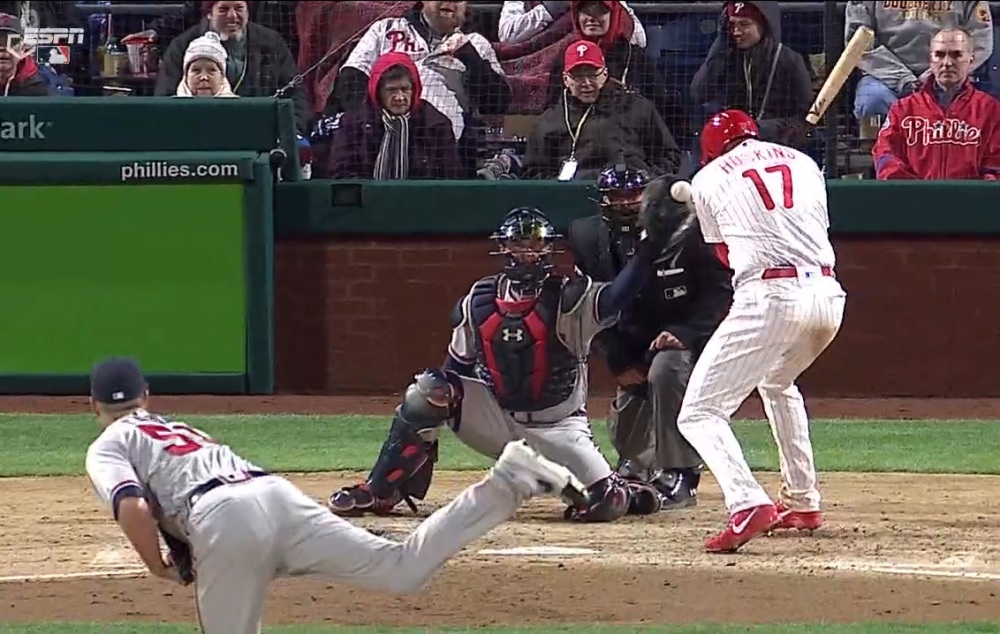 Baseballs slip from pitchers’ hands all the time, inadvertently contacting batters as a matter of accident. When it’s cold and windy and grip is poor, this is especially true. It was certainly true Sunday night in Philadelphia, as the Phillies and Braves combined for 15 walks and three hit batters.

When the timing of one of those hit batters is questionable, however, every mitigating factor flies out the window. Which is why the Phillies were so angry at Braves reliever Shane Carle.

When Carle drilled Rhys Hoskins in the seventh inning, it followed a Bryce Harper and subsequent celebration with his teammates just outside the dugout. It might have been that Harper’s homer put the Braves into a 4-1 hole after they’d already lost the first two games of the series while giving up 18 runs. Nobody could blame them for frustration.

The other source of Philadelphia’s ire was that the pitch came in nearly head-high, eventually striking Hoskins on the shoulder.

The rest is details.

Followed by a HBP from Shane Carle near the head of Rhys Hoskins, who is ticked and rightfully so. #Phillies pic.twitter.com/i6tu95gron

Hoskins got up yelling, clearly furious. It was the third time in two games against Atlanta that pitches had come close or actually hit him. Plate ump Rob Drake agreed, ejecting Carle.

“It really pisses me off when balls go underneath Rhys Hoskins’ chin,” he told the media, referencing the fact that Hoskins wears a C-flap on his helmet after having his jaw broken by a fouled bunt attempt last season. “It really bugs me. … He’s one of our leaders. He is, in many ways, the heartbeat of our club. It really bothers me when it happens.”

This matters less in a one-game sample than it does when considering that these teams—each of them hoping for full resurgence after long fallow periods—play each other 16 more times this season. Should Braves pitchers take liberties with the inside corner against Philadelphia, even without trying to hit anyone, they have to know that they’re playing with fire. The same can likely be said for members of the Phillies staff.

Here’s hoping that nothing comes of it, but boy it’s gonna be fun to watch.