When a young player runs afoul of the unwritten rules, he’ll likely be taken aside by his manager or a veteran teammate for an explanation of proper behavior.

Should that fail, they bring in the big guns.

In the case of the Florida Marlins and Hanley Ramirez, that means Andre Dawson and Tony Perez, both of whom serve as special assistants to the club.

According to the Miami Herald, Dawson, an eight-time All Star and the NL MVP in 1987, began by telling Ramirez that “it’s time to get your act together,” calling him “immature” and adding that the player owes his teammates an apology.”

Perez, a Hall of Famer, followed with a similar message, this time in Spanish.

In the clubhouse before the team’s game in St. Louis, Ramirez circulated among the players and offered apologies both for the play that got him into hot water in the first place, and his follow-up comments, which were less than kind to both teammates and manager Fredi Gonzalez.

In this case, an apology—about which Wes Helms said in the Fort Lauderdale Sun Sentinel, “He felt bad and you could tell”—is not so different than a retaliatory fastball. The latter is a tool used to settle an on-field score, allowing both teams to close the book on a bad situation and move forward, fresh. The former is its verbal equivalent, albeit from a conciliatory perspective.

For an example of what can happen should an apology fail to arrive after such a situation, look back to the Yankees in 1977, when Reggie Jackson announced his arrival in New York by proclaiming in Sport magazine that “I’m the straw that stirs the drink,” and that team captain Thurman Munson “can only stir it bad.”

“I don’t think some of the guys have forgiven him for that to this day,” wrote reliever Sparky Lyle in The Bronx Zoo. “Why did he have to do it? . . . If he had kept his mouth shut, he could have done everything he had wanted to do. . . . When he tried to nail Thurman, that was going too far.”

Jackson never apologized—not publicly, anyway—and it ended up costing him in myriad ways. “It was every moment of every day,” he told Sports Illustrated in 1980. “It was a coldness in the clubhouse, a coldness on the field, a coldness from the stands. Every day. Every day. I don’t want it on my mind; I don’t want those scars.”

With a single step, Ramirez was able to avoid all that.

“It means a lot to do what he did, because now we can lay it down,” said Helms. “That’s always going to be on your mind unless it’s taken care of. He did the right thing.”

Baseball has a Code to enforce respect. Publicly, this happens almost exclusively between opposing teams. Not this time.

After pulling Ramirez from a game for egregiously loafing after a ball, Marlins manager Fredi Gonzalez went against the grain in calling out his star player in the press—although it’s easy to suspect that was one of his final options, not his first.

At that point, to use a baseball term, Ramirez blew the save.

Various teammates, most notably Wes Helms, have spoken about the need for Ramirez to step it up at this time. The sheer amount of insider comments of the type that are almost universally kept behind closed clubhouse doors is astounding. It’s a public intervention.

For his part, Gonzalez continued to push the impression that messages sent through the media are the only ones Ramirez receives.

One can only hope. 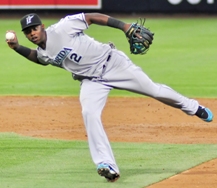 Is he or isn’t he injured? Does he or doesn’t he care? The questions rage in South Florida after Marlins shortstop Hanley Ramirez accidentally kicked a baseball 100 feet into the left-field corner yesterday, then lazed after it while two runners scored.

Ramirez had fouled a ball off his left ankle an inning earlier, which may have hindered his efforts .

His manager, Fredi Gonzalez, didn’t buy it. “Whether he’s hurt or not hurt or whatever it was, we felt the effort wasn’t there that we wanted,” he told the Palm Beach Post. “There are 24 guys out there, busting their butts. (Watch the replay here.)

The only appearance the concept of hustling makes in the unwritten rulebook is that it’s always expected, although players can earn a variety of Code-based exemptions, most of which have to do with star treatment. (The number of times Barry Bonds humped it down to first on a ground ball over the final five years of his career can probably be counted on one hand.)

More pertinent to the Code is something Gonzalez followed closely—the rule mandating that, with the exception of pitchers or in the case of injury or a double-switch, a player should never be removed from a game in the middle of an inning.

Gonzalez waited until Ramirez returned to the dugout after the frame. With just a few words of discussion, he then sent him to the clubhouse, inserting Brian Barden in his place.

Ramirez insisted that he was slowed by the injury, not a lack of effort. “That was,” he said in an MLB.com report, “the hardest I could go after the ball.”

Had Gonzalez opted to act sooner, he wouldn’t have set precedent. In 1969, Mets manager Gil Hodges pulled left fielder Cleon Jones in the middle of an inning after a lackadaisical effort, not unlike that from Ramirez.

In the Mets’ case, however, there were other mitigating factors. Jones had been playing on a sore hamstring on a muddy field; his entire team was likely beaten down by the fact that to that point in the day—late in the second game of a double-header—New York had been outscored by the Astros, 24-3. The play in question came on Houston’s sixth hit of the inning, in addition to two walks.

When Hodges emerged from the dugout, however—hands in pockets, head down—he first appeared to be headed toward the mound. Then he veered toward shortstop, then toward Jones in left. (This led to speculation that he merely got lost on his way to speak to pitcher Nolan Ryan.) Upon reaching Jones, Hodges put his arm around the left fielder, and they returned to the dugout together.

Although Hodges clearly violated an unwritten rule with the move, he upheld another one after the game, pinning his decision on Jones’ injury and saving personal blame for a closed-door meeting with the player.

Forty-one years later, Gonzalez did not follow suit. He had a message for Ramirez, and he delivered it through the media. A sampling of his comments, taken from the Post:

In case that wasn’t enough, Gonzalez held up as paragons two members of the team whose efforts he felt were exemplary:

This sort of verbal sortie is not undertaken by a manager noticing for the first time that his best player has failed to give a sufficient effort. This is a tactic taken by a manger who, having tried (and apparently failed) to reinforce this value with said star player, has given up the ghost and opened up whatever avenues of attack he finds at his disposal.

(Gonzalez’s opinion was backed up, albeit more tactfully, by veteran Wes Helms, who told MLB.com, “A lot of guys, coaches, staff have told Hanley. With his talent, he definitely needs to be the leader of this team. Mentally. Vocally. Everything. For me, to be a leader of the team, you have to lead by example. . . . It’s the way you handle yourself. That’s the way a true leader is. He definitely has the play to be a leader, but you want him to lead by example.” Translation: Step it up, Hanley.)

Gonzalez was clearly frustrated. He was also wrong. Now he has a disgruntled superstar on his hands, and a roster full of players who might be wondering whether he might do the same to them should things turn sour.

While Gonzalez is a capable manger, it didn’t take long for Ramirez to home in on his primary weakness in regard to player relations: “He doesn’t understand (playing hurt)—he never played in the big leagues,” Ramirez, who is signed through 2014, told the Post.

Perhaps it would have come to this anyway, even without Gonzalez’s public displays of frustration. Media scrutiny, however, rarely improves caustic situations.

After Hodges publicly backed Jones after the incident in ’69, the Mets went 45-19 through the end of the season, and won the World Series.

The Marlins, on the other hand, are officially on the cusp of team-wide disruption. Expect a closed-door meeting soon.

Update: Ramirez didn’t do much to help his cause with his comments the next day.