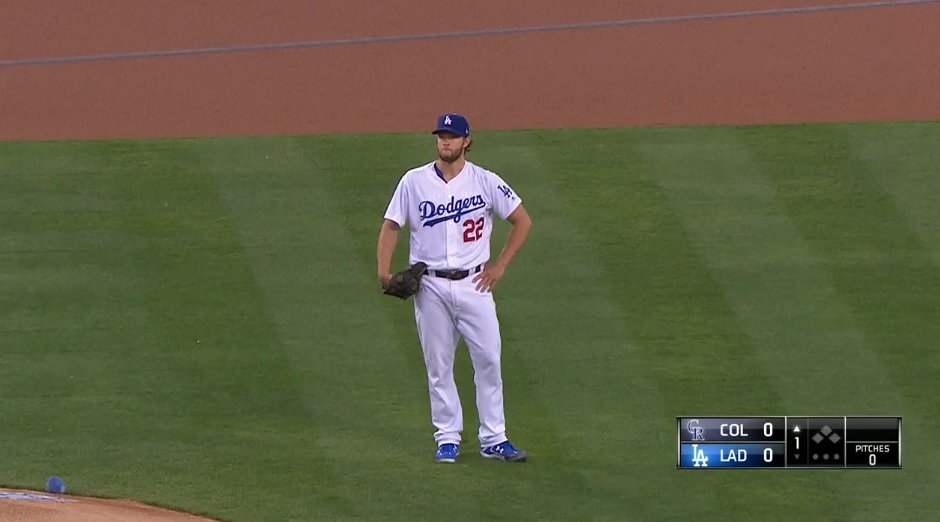 Clayton Kershaw called it “disrespectful,” but really it was more thoughtless than anything.

The lefthander was preparing to pitch to the first batter of yesterday’s game against Colorado, Charlie Blackmon, when plate ump Quinn Wolcott put up his hand to pause the action. Rockies starter Tyler Anderson had taken some extra warmup tosses in the bullpen and was slowly walking back to the dugout along the sideline. Wolcott wanted the field cleared before the game began.

Kershaw couldn’t believe it. He lifted his palms in disbelief, then paced his way off the back of the mound, standing in the infield grass, arms akimbo, while Anderson departed.

“That was one of the more disrespectful things I’ve been a part of in a game,” the pitcher said after the game. “I really didn’t appreciate that. The game starts at 7:10. It started at 7:10 here for a long time. Just go around or finish earlier. That wasn’t appreciated, for sure. Not going to say any more—I’ll get in trouble.”

If it seems like a high-strung reaction for a few seconds’ worth of delay, it might be—but it’s justified. Kershaw, like most great pitchers, is a creature of focus and timing. When he’s in the process of going through routines both mental and physical to begin a game, any interruption can present a derailment. Sure enough, the first three Rockies reached base, on a walk and two singles. Kershaw denied that Anderson’s sojourn had anything to do with it, and, after surrendering only one run in getting out of the jam, he settled down to give up only four hits and one run over the next six, striking out 10 in the process.

At issue is a ballplayer’s territory, and how decorum prevents opponents from encroaching upon it. Hitters, for example, never walk between the pitcher and the catcher en route to the batter’s box. When necessary, they walk around, behind the umpire. It’s an easy thing to overlook from the grandstand, but the sanctity of the space is inviolable. That path belongs to the pitcher, at least while he’s holding a baseball, and everybody understands it.

When Alex Rodriguez trod atop the mound on his way back to the dugout after flying out in 2010, the pitcher he crossed, Oakland’s Dallas Braden, gave him an earful. At the time, people wondered what the problem was, but for anyone paying attention the answer was obvious—the pitcher’s mound is sacred, and any invasion is insufficiently deferential to the guy trying to do his job there.

(Sidenote: I covered that very topic in The Baseball Codes, for a chapter that was cut prior to printing for space considerations. In it, Dodgers manager Dave Roberts—a Giants outfielder when I talked to him—said, “That’s his office, his domain To run across it is disrespectful.”)

Anderson denied intent, telling reporters that he “didn’t mean any disrespect” and that he was surprised that Wolcott didn’t allow the game to begin. But the delay interfered with Kershaw’s process, whatever it may have been. The pitcher was within his rights to be annoyed.

Kershaw expended 27 pitches in that first inning, which was almost certainly a factor in his failure to reach the eighth. That might have been one reason for his postgame rant. Even more so, I’m guessing, was Anderson’s simple lack of etiquette. The guess here is that retaliation of any sort will be unnecessary—we’ll never see something like that again from a Rockies pitcher, at least not at Dodger Stadium.