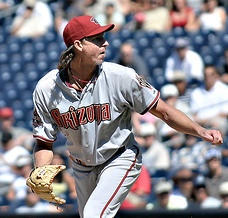 Randy Johnson retired yesterday. The highlight of his soon-to-be-Hall of Fame career was the perfect game he tossed in 2004 — a great moment for Johnson, the Arizona Diamondbacks and baseball in general. His manager, Bob Brenly, however, didn’t enjoy things quite as much as the rest of us.

Read on, in the following excerpt from The Baseball Codes:

“Same seats, same thoughts—that’s the mantra,” said Bob Brenly, manager of the Arizona Diamondbacks when Randy Johnson threw his perfect game in 2004. “From about the fourth inning of that ballgame on I found myself sitting on the bat rack at Turner Field. (Second baseman) Matt Kata’s bat was sitting right next to my right leg, and before every pitch I would tap that bat just to knock wood for luck. The deeper we got into the game, I was afraid to stop doing it. I’m a firm believer in the baseball gods—you show them their due respect and they will reward you. So I didn’t move off that bat rack. I knocked on that bat on every pitch. My knuckles were raw by the end of the game, but I just felt that you can’t change anything.”

Of course, late in the 2-0 contest, Brenly wanted to insert a defensive substitute for left fielder Luis Gonzalez, but his superstition left him hesitant to disrupt the game’s rhythm. He also considered having a pitcher warm up as the 40-year-old Johnson’s pitch count climbed in the late innings, but didn’t want the pitcher to even glimpse such a thing.

“What should have been one of the easiest games to manage, I was losing my hair over,” he said. “I had never been involved in a game like that before, and I just didn’t want to do anything to screw it up. That was one of the most stressful games I’ve ever been involved with in my life.”