Perhaps this is what Cole Hamels was talking about when he proclaimed his drilling of Bryce Harper last week to be “old-school baseball.”

Old-school baseball frequently involves long memories, and a willingness to respond to a situation even if it has long since passed. On Monday, Arizona’s Ian Kennedy did exactly that.

Kennedy was facing Dodgers ace Clayton Kershaw for the first time since last season, when Kershaw was unceremoniously ejected for hitting Diamondbacks outfielder Gerrardo Parra with a pitch. Parra’s drilling was itself a response to a home run he hit off Los Angeles reliever Hong-Chih Kuo, after which he loitered in the batter’s box as it left the yard. Parra’s loitering was in response to an earlier Kuo pitch that buzzed him as he was squaring around to bunt.

Cause and response. Response and cause.

Fast forward eight months, to Monday night. When Kershaw stepped to the plate to lead off the third inning, Kennedy brushed him back with a first-pitch fastball. In case the message was still unclear, three pitches later Kennedy sent one behind Kershaw’s back. Kershaw stared into the Arizona dugout in disbelief, and, wrote Nick Piecoro in the Arizona Republic, “had no problem receiving the message the Diamondbacks were sending.” (Watch it here; for a fuller examination, see the recap.)

Kershaw’s turn came in the fifth, when Kennedy stepped to the plate and was greeted with a fastball, high and inside. That was enough for plate ump Marvin Hudson to issue warnings to both benches.

Was Kennedy trying to hit Kershaw? To judge by his follow-up effort, he was, but didn’t get it done either time. Did Kershaw handle things appropriately, dishing out as good as he got without escalating matters? Absolutely.

Also, unlike Hamels, blanket denials were the order of the day.

“[Kershaw] is a good hitter, so I had to throw inside on him,” Kennedy said in the Republic. “The second one I just pulled way too much.” (D-Backs shortstop Willie Bloomquist, however, admitted that “no one was trying to hurt anyone—it was just to prove a point.”)

“It’s pretty strange that he throws two up and in like that and one at my shins,” responded Kershaw. “His catcher is saying he’s missing his spots. It’s pretty obvious what they’re doing. I don’t really understand it. I know their manager over there likes old-school baseball, but old-school baseball means you don’t carry over things from last year.”

Actually, that’s exactly what old-school baseball means. It’s easy to say that Kennedy should have left well enough alone, and that renewing old hostilities ultimately does little good for anybody involved. The only real counter to that is the tenor of the Arizona clubhouse, and the unknown conversations that may have led to Kennedy’s action, be they with Parra, manager Kirk Gibson or some other aggrieved teammates. There is a palpable charge that a pitcher faces in standing up for his teammates, and those found to be derelict in that duty are quick to lose clubhouse support.

Ultimately, of course, nobody was hit, the fact that both pitchers ended up walking in their targeted at-bats didn’t end up hurting the opposition, several messages were sent, and everybody emerged unscathed. 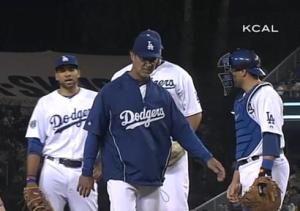 A nearly unprecedented comingling of rules both written and unwritten descended upon Dodger Stadium on Tuesday, as inside pitches inspired retaliatory strikes, one pitcher was ejected for drilling an opponent and another was tossed because his manager mucked up the rulebook.

It all might have started in April, at least according to Dodgers manager Joe Torre. That was when Los Angeles head-hunter Vicente Padilla broke Aaron Rowand’s cheek with a fastball, knocking him out of action for more than two weeks.

Thus, when Tim Lincecum knocked Matt Kemp down with an inside pitch on Tuesday, and followed that up by drilling him, it was easy to draw conclusions about retaliation. (Kemp certainly did, taking several steps toward the mound before being redirected by umpire Adrian Johnson.)

Never mind that Lincecum had a chance to respond as the Giants starter the day after Padilla’s deed, more than three months ago, or that the Giants have faced the Dodgers six times since the incident without drilling anybody.

There’s also the fact that Lincecum was unusually terrible, lasting just 4 2/3 innings, missing the strike zone on seven of his first eight pitches, giving up five runs and throwing about the worst pitch humanly possible.

Still, when Giants reliever Denny Bautista twice came well inside to Russell Martin in the sixth, the Dodgers took it extremely personally. (Bench coach Bob Schaefer was ejected for the vociferous nature of his protestations.)

Despite a warning leveled by Johnson after Lincecum plunked Kemp, Dodgers starter Clayton Kershaw drilled the next batter he faced, Rowand, in the hip, earning ejections for himself and Torre. (Watch the chain of events here.)

“When Kemp took a few steps toward Timmy, that made no sense because obviously Tim was struggling and wasn’t trying to hit him,” wrote Giants outfielder Aubrey Huff on his blog. “We were all a little jumpy right there, waiting to see what was going to happen. And Bautista definitely wasn’t trying to hit Russell Martin. . . . Now, I imagine, it’s all over and done with. They got their retaliation shot in, and that’s it.”

(Kershaw received a five-game suspension for his actions, while Torre and Schaefer were docked a game each.)

This left Dodgers coach Don Mattingly in charge of the team.

Los Angeles closer Jonathan Broxton came on in the ninth to protect a 5-4 lead, and promptly loaded the bases with one out. Mattingly visited the mound to inform members of the infield where he wanted them positioned. After he turned to leave, however, first baseman James Loney asked another question. Mattingly returned to address it, before heading to the dugout. (Watch it here.)

The issue: This constituted two visits, something not allowed in the same inning under rule 8.06 of the Official Baseball Rules, which stipulates that a mound visit begins when a manager or coach crosses the foul line, and ends when he departs from the 18-foot diameter of the mound.

“I really just went out to let the infield know we were going to play back,” said Mattingly in the Los Angeles Times. “[Hitter Andres] Torres could run. And the corners were basically pretty much going home. After I did that, I turned to walk away and James [Loney] said something, and I kind of turned around. I didn’t realize I was even off the dirt, but obviously I was.’’

Umpire Johnson shouted, “No, no, no. You can’t go back,” and Giants manager Bruce Bochy pounced. The umpires informed Mattingly that according to the rulebook, Broxton would have to leave the game. That left George Sherrill, having not received adequate time to warm up, to enter the game virtually cold.

He promptly gave up a two-run double to Torres that proved to be the difference in the game.

The umpires could have afforded Sherrill as many warm-up tosses as he wanted, but had the power to cut him off after eight—which they did. It was a detrimental decision from the Dodgers’ point of view, but at least it hewed to the rulebook.

Ejecting Broxton: not so much.

Rule 8.06 was codified in 1967, in an effort to minimize mound visits and speed up games. Because relief pitchers must face at least one hitter per appearance, an adjunct to the rule keeps managers from circumventing it by using back-to-back mound visits to remove a pitcher and improve matchup possibilities. It does this by stating that the manager will be ejected for the action, as will the pitcher, but only after he faces the guy at the plate.

(The umps should not even have ejected Mattingly, writes Henry Schulman of the San Francisco Chronicle, because they didn’t adequately warn him against a second visit, as stipulated by the rules.)

Bochy knew about all of this, having invoked the rule in 2006 as manager of the Padres (also against Los Angeles). That time it was properly carried out, with Dodgers pitcher Brad Penny remaining in the game to face the hitter.

“I think that’s the craziest win we’ve had all season,” said Giants reliever Jeremy Affeldt, who picked up the save, in the San Francisco Chronicle. “I’m sure we’ll put our heads on our pillows and smile.”

As will those of us who pay attention to this kind of thing. The written rules managed to bite the Dodgers on Tuesday; the teams next meet in San Francisco on July 30, at which point we’ll see if there’s a need for rules of the unwritten variety.