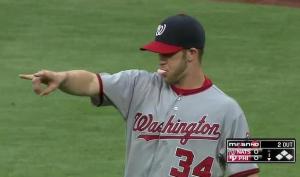 So the big showdown happened. Nearly three weeks after his drilling of Bryce Harper renewed baseball’s fascination with the unwritten rules, Cole Hamels stepped to the plate three times against Edwin Jackson, once with first base open, and didn’t even get brushed back.

The Phillies, of course, got their retaliation back in the same game that Harper was first hit, when Jordan Zimmerman drilled Hamels in the leg. That effectively closed the book for both parties. There was a chance that Hamels’ after-the-fact admission could have earned him some extra attention, but that never came to pass.

Hamels said that it wasn’t “even in the back of my mind.”

Harper said everything was behind him, and that he didn’t think “anybody really cares about it anymore.” 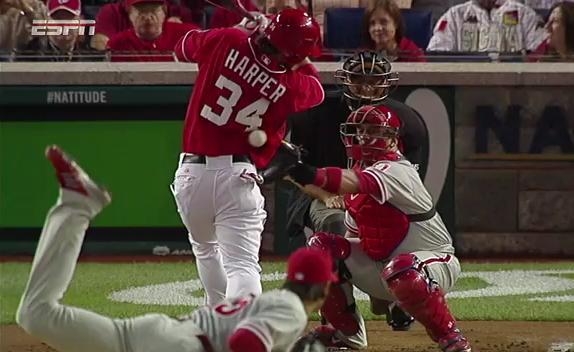 This is the Code, at its deepest and most ingrained levels. It is the confluence of ability and pride and hype and the concept that all men must earn their successes. It is the old guard welcoming the new—player and team alike—with an unmistakable challenge: Welcome to the big time. Let’s see if you can hack it.

It was Cole Hamels, burying a fastball into the small of Bryce Harper’s back in the first inning Sunday (watch it here), partly to warn the 19-year-old phenom that life at this level will be harder than expected, partly to provide a physical component to the opinion that the Nationals’ 18-win, 9-loss, NL East-leading start—5.5 games ahead of last-place Philadelphia—was still at least 75 victories short of actually meaning something.

Just in case there was any leeway in possible interpretations, Hamels made things clear after the game, telling the world that the pitch was laden with meaning.

“I was trying to hit him,” the left-hander said in a Philly.com report. “I mean, I’m not going to deny it. It’s something that I grew up watching. I’m just trying to continue old baseball, because I think some people get away from it. I remember when I was a rookie, the strike zone was really, really small and you didn’t say anything, because that’s the way baseball is. But I think unfortunately sometimes the league is protecting certain players and making it not as that kind of old school, prestigious way of baseball.”

Whether Hamels was annoyed by Harper’s questioning the strike zone in an earlier game—even as the Phillies pitched around him—remains unclear; the pitcher declined to discuss the point at which he decided to plunk him. Little matter—this is how veterans handled rookies for generations, and was as retro an act as could be imagined in the modern game.

Frank Robinson was hit 20 times during his rookie season—the most of his career—a result, he said in the Sporting News, of “those guys . . . trying to test me. They were trying to see what I was made of.” Don Drysdale did much the same thing when he buzzed Orlando Cepeda in the future Hall of Famer’s first major league at-bat. In 1939, Browns manager Fred Haney ordered that Ted Williams be knocked down twice in a game, after the rookie had gone 7-for-16 against St. Louis over the previous four contests. Williams got up twice, and put a stop to the tactic with a homer, a double and six RBIs.

Which, to Harper’s credit, is not dissimilar from what Washington’s rookie ended up doing on Sunday. After Harper was drilled, he didn’t hesitate in taking third when the next batter, Jayson Werth, singled to left. The moment Hamels threw to first to keep Werth close, Harper broke for the plate, sliding in easily under the tag of Carlos Ruiz. (Watch it here.)

Harper’s skills have never been questioned. With displays like Sunday’s, his mental toughness will probably soon reach that point as well (if it hasn’t already). “If he continues to do that, he’s going to make a really good name for himself,” Hamels said afterward, admiringly.

The circle was closed in the top of the third, when Washington starter Jordan Zimmerman responded by hitting Hamels in the leg. (Unlike Hamels, Zimmerman denied intent. Also unlike Hamels, nobody believed him.) For his part, Hamels considered it an appropriate response.

“That’s the way it should work,” he said.

Hamels lost the battle but won the war. Harper aside, the Phillies’ left-hander shut down the Nationals over eight innings, allowing just five hits and Harper’s stolen run in a 9-3 victory. With as clear a message as Hamels delivered to the rookie, there appeared to be just as much intent toward an increasingly confident Nationals team that, Hunter Pence said in the Washington Post, was playing like they had “a chip on their shoulder.”

Which brings up one more possibility when dissecting Hamels’ mindset. The act brings to mind the time in 1974 when Dock Ellis tried to knock the swagger out of the upstart Cincinnati Reds, using the revolutionary tactic of hitting every batter he faced. Ellis opened the game by drilling Pete Rose, Joe Morgan and Dan Driessen in succession, then walked Tony Perez on four pitches after the first baseman—in clear recognition of imminent danger—bailed out as soon as each pitch was released. The right-hander was removed by befuddled Pirates manager Danny Murtaugh after going 2-0 on the next hitter, Johnny Bench, but by that point it didn’t matter—Ellis’ message had been sent. And here’s the key point: The most important recipients weren’t even members of the Reds, but Ellis’ own Pittsburgh teammates. Intimidating Cincinnati was an obvious bonus, but the pitcher’s primary goal was to jolt what he increasingly viewed as a complacent Pirates clubhouse.

It worked. Having won only six of 18 before the game, Pittsburgh went 82-62 the rest of the way and won the National League East for the fourth time in five years.

The Phillies, by contrast, have won the National League East five years running. Hamels hasn’t shared his views on his team’s toughness (or lack thereof), but as one of only two pitchers remaining from the beginning of that run (Kyle Kendrick is the other), it would not be surprising if Hamels wanted to send a message to a club struggling to maintain its position atop the National League’s pecking order.

Hamels’ act has drawn scorn from various circles, not least of them Washington’s front office. “I’ve never seen a more classless, gutless chickenshit act in my 30 years in baseball,” said Nationals General Manager Mike Rizzo in the Washington Post. “[Hamels] is the polar opposite of old school. He’s fake tough.”

Rizzo continued: “He thinks he’s going to intimidate us after hitting our 19-year rookie who’s eight games into the big leagues? He doesn’t know who he’s dealing with.”

In one capacity, at least, Rizzo is dead wrong. Hamels knows a lot about the guys he’s dealing with. At least the ones he’s dressing next to each day.

The pitcher’s message couldn’t have been more clear. Now it’s up to the rest of us to figure out its intended recipients.

Note: A version of this post just went up at Sports Illustrated.com.

Update (5/07): Hamels was just suspended for five games—a predictable result after his admission. He won’t appeal, which essentially just pushes him back a day, for a Sunday start.

Update II (5/07): Phils manager Charlie Manuel put into words what we all already knew (at least as it relates to punishment from the league): If nothing else, Hamels should have kept his mouth shut.

Update II (5/08): Jim Leyland has weighed in, and feels that Hamels’ suspension was too light. In a burst of counter-intuitive blogging, I tend to agree with him. The fact that he admitted it gave MLB little choice but to punish him. A five-game suspension for a starting pitcher, however, has negligible effect—especially when it comes, as it did for Hamels, immediately following a start. Specifics of this case aside, forcing a pitcher to miss action, rather than simply delaying his start by a day or two, would hold far more weight.

Update III (5/09): Apparently Hamels isn’t the only one who talks too much. Rizzo has picked up a fine for his comments.

Spring training is a grand old time for pitchers to let off some steam. Be they perturbed by an event from the game in front of them or harboring long memories from seasons past, the allure of repercussion-free retaliation (who cares if runs score during an exhibition game?) is felt at least a few times each season.

Look no farther than this week’s matchup between Cole Hamels and Bill Hall.

Hall, now with the Astros, was unhappy that Hamels appeared to be quick-pitching him, throwing the ball before he was fully ready. (How this tactic would help Hamels prepare for the regular season, I’m not sure.)

So Hall stepped out in an effort to slow Hamels. The pitcher’s response was to send his next offering inside, which was sufficient to send Hall from zero to boiling. According to the Houston Chronicle, he had to be restrained by plate ump Laz Diaz.

After the game, Hall called Hamels a “marked man”—not so much, he explained later, as it pertains to the left-hander’s physical wellbeing, but to the on-field respect he receives. Translation: Expect Hall to show Hamels up at the earliest available opportunity.

Well, okay. Houston opens with three games at Philadelphia, starting April 1. With Hamels scheduled to be Philadelphia’s No. 4 starter, however, Hall will likely have to wait until September—September!—for a chance to disrespect him back.

Elsewhere in the Grapefruit League, Nyjer Morgan was hit by Ricky Nolasco and wasted no time in accusing the pitcher of intent. Then again, after Morgan’s protracted saga against the Marlins last season—partial tally: he separated the shoulder of catcher Brett Hayes in a play at the plate; he reacted to being hit the following day by stealing two bases with his team down big (as clear an insult to the Marlins as could be delivered); he charged the mound when he was hit again later in retaliation for the stolen bases—one could hardly blame Nolasco.

Again, this is spring training—a time when many of these sorts of grudges get handled like this.

Rather than go on a near-meltdown-level tirade like last season, however, Morgan should be commended for his level-headed approach this time around. Instead of getting bothered, he stole second, advanced to third, then scored. (Watch the drilling here.)

“No question, without a doubt,” said Morgan when asked if he felt Nolasco hit him on purpose Sunday. “It’s obvious because of what happened last year. Obviously, they haven’t turned the page. But I’m going to be a stronger player, better person. I’m not going to react to it. I felt better by going out there and being able to steal that bag, getting myself over to third and generating a run. I felt more satisfied after that than staring at him and putting on my mean mug.”

The “mean mug,” of course, is a time-tested part of on-field intimidation. It’s what Morgan does with the rest of his body that truly counts.

He’s off to a good start.

Update: Yahoo’s David Brown recently spoke to Florida’s Logan Morrison for his Answer Man column. Included in the conversation was the following exchange:

DB: Can there be peace between the Marlins and Nyjer Morgan?

LoMo: Yeah, absolutely there can be. You want me to expound on that?

LoMo: Just don’t steal second base and third down by 10 runs.

DB: He was just fighting for that run. Trying to get back into the game.

LoMo: You could call it that.

LoMo: I’m going to say everybody overreacted. … But … there’s baseball etiquette and baseball rules that need to be followed and they weren’t followed.