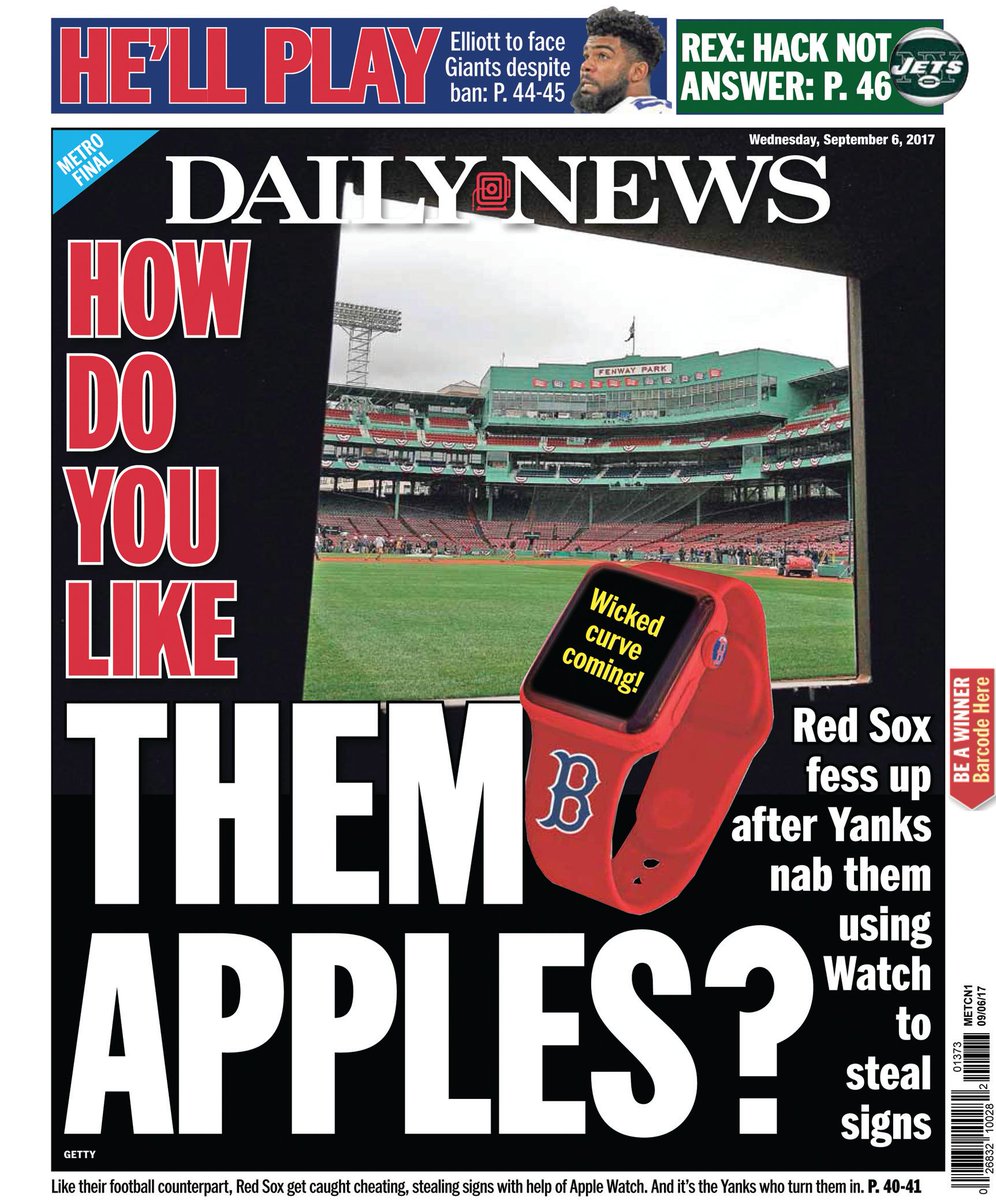 As detailed in The New York Times, the Yankees recently filed a complaint with the league office—complete with video evidence—which began an inquiry into Boston’s sign-stealing practices at Fenway Park. What investigators found: the Red Sox had a clubhouse-bound employee pick up opposing catchers’ signals via a video feed, then transmit them to assistant trainer Jon Jochim in the dugout via an Apple watch. Jochim relayed the information to players.

The first piece of evidence New York cited occurred during the first game of a series in August, when Boston went 5-for-8 with runners at second base. Whereas players in that position are generally seen as having a good vantage point to peer into a catcher’s signals on their own, in this case they were relaying signs from the bench.

Where this story takes a turn away from the legions of similar such pursuits across baseball history is that the Red Sox admitted culpability (while insisting that manager John Farrell and GM Dave Dombrowski knew nothing about the scheme).

To clarify. Farrell knew players were trying to steal signs. He did not know there were devices being used. "I would have shut that down."

For those who might interpret this as a symbol of illegitimacy to Boston’s lead in the American League East, well … it’s complicated. Stolen signs haven’t helped Chris Sale or Drew Pomeranz become dominating starters, and they didn’t help Rick Porcello win the Cy Young Award last year. Without knowing exactly when the Red Sox started the practice (the Times reported that it had been in place for “at least several weeks”), they are just about league average when it comes to batting average, and are dead last in home runs. They actually average more runs on the road than they do at home (4.79 per game vs. 4.66). There’s also the fact that, even though Boston went 5-for-8 with runners at second on Aug. 18 to arouse New York’s suspicions, Red Sox hitters subsequently went 4-for-16 in identical situations over the series’ final two games, hardly the stuff of intrigue.

During one game at Fenway Park this year, the Tigers' bench was loud in their objections over what they felt was BOS sign-stealing.

My own lingering question is that, with New York’s signs available in the dugout, why the Red Sox waited until a runner was at second base to relay them. Not only did this limit Boston’s opportunities, but placed the Red Sox at far greater risk of being caught. Much simpler would have been a verbal system such as the one Hank Greenberg enjoyed in Detroit in the 1940s, in which “All right, Hank” indicated a fastball, and “Come on, Hank” meant a curve. Other iterations have included shouts of encouragement using either a player’s first name or last name to mean different things, or a simple whistle, which Yankees pitcher Bob Turley used to notify his teammates that an upcoming pitch would be different than the one preceding it.

The Red Sox responded by filing their own complaint against the Yankees, who they claimed were stealing signs at Yankee Stadium via a TV camera from the YES Network.

The history of such pursuits is legion:

More recently, the Blue Jays were accused repeatedly, by numerous opponents, of similar activity at the Rogers Centre, to the point that ESPN commissioned an expansive expose on the practice.

The Phillies drew the ire of multiple teams—including the Yankees, in the World Series—for their alleged ballpark shenanigans. It didn’t help that, in 2010, their bullpen coach was caught on the field with binoculars.

In 2014, Chris Sale accused Victor Martinez and the Tigers of having somebody in center field.

The Padres have had (probably baseless) accusations thrown their way, as have the Marlins.

All of which is to say that this is nothing new. If you haven’t heard about repercussions from those other incidents, you likely won’t remember the fallout from this one either. Assuming that the Red Sox knock it off, you can expect it to quietly disappear.

this is what happened when the Red Sox stopped using their Apple Watches pic.twitter.com/bm6h7NoGv6